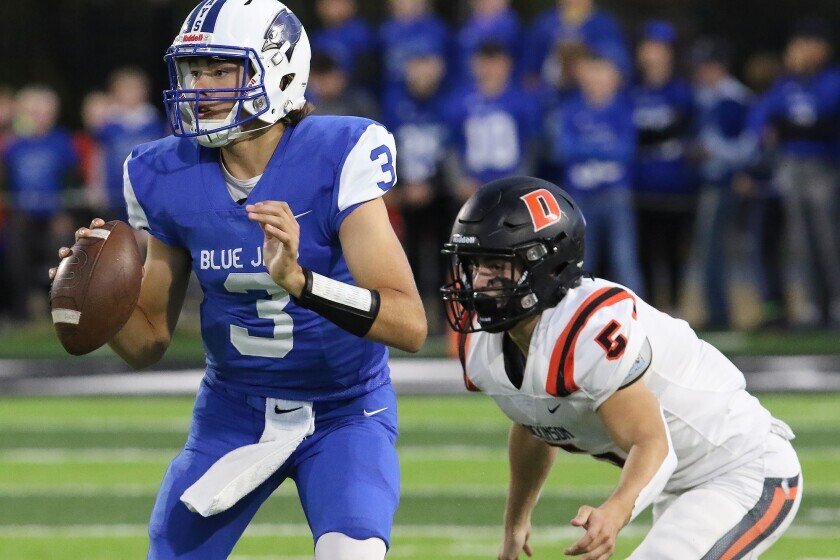 “Sports have always been a part of our lives,” said Jamestown High School assistant football coach, Marty Hochhalter. “We don’t do many competitive things around the house because we are all very competitive. We try to eliminate that part as much as possible.”

Marty has been coaching for the Jamestown High School team since 2016. His son, Payton, has been the starting quarterback for the Blue Jays since last year. Since the duo has been on the sidelines together, the Jays have gone 15-3.

“Payton’s been dragged along to a lot of different sporting events in his day,” Marty said. “I was the head football coach up in Carrington from kindergarten on he almost never missed a practice. He was on the sidelines during practices and then on Friday nights he was the ball boy.”

Marty began his coaching career in 1989 at Fergus Falls Community College. Since he first started coaching Marty has gone on to coach track and field, baseball and for a brief stint — junior high basketball.

“What’s unique about coaching is that you have the ability to help student-athletes achieve their goals or achieve more than what they think they are capable of,” Marty said. “It’s been a great profession and I’m blessed to be a part of it.”

Prior to coming to Jamestown, Marty was the head football coach at Carrington for 25 years.

“It’s great to have him around at practice … but the best part is to break down film at home with him,” Payton said of Marty. “His experience and knowledge of the game make him a great coach.”

The coaching veteran heads up the Blue Jay offensive line. The line has allowed Payton time to pass for more than 1,300 yards this season. Prior to last week against Dickinson, the line had only allowed for 619 rushing yards all season.

Having Payton as one of the 11 offensive players is a definite plus.

“He has an ability to get others on the same page and he demonstrates leadership. He has confidence in his teammates and (believes) that together we can keep going 1-0 each week.”

Payton has had plenty of practice when it comes to cultivating and developing his abilities as a team member since he has not only played sports from the time he was five years old but he’s also watched others and has seen what it took for them to succeed.

“He’s grown up with sports — watching his older siblings compete and been a part of their victories and their defeats and I think he’s learned from each one of them how to get ready for a game or how to prepare yourself for a season,” Marty said of Payton. “I think that’s been important.”

A few years later, the third-born, Marcus, went on to play football at the North Dakota State College of Science (NDSCS).

“Growing up with my brother, that is four years older than me, was a challenge but it made me a great competitor,” Payton said. “I always had the underdog mentality while playing sports with my brother and his friends.”

When Payton wasn’t watching or playing with his siblings, he was watching Marty and his mom, Jan.

When Marty was the head coach up at Carrington, Payton was on the sidelines for almost every practice and on Friday nights, he carried on the family tradition of being a ball boy for the Cardinals.

“Growing up I was always at either football, basketball, or track practice due to my parents coaching,” Payton said. “Being at football practice since I can remember showed me what it takes to make a great team.

Payton has done his part when it comes to making the Blue Jays great.

Through the team’s six games he has averaged 225 yards passing and is 54% in terms of completions. He has thrown for 19 touchdowns and has rushed for a pair of scores.

If he keeps it up, it wouldn’t be surprising if the senior’s voicemail was flooded with messages from college coaches.

“I’ve always had the dream of playing at the next level,” Payton said.

Payton has not yet made a final decision regarding his collegiate career. Instead, he and Marty are enjoying their final high school season as a father-son duo.

“I’ve been very fortunate to be able to coach all of these years and have him and all of my kids be a part of it,” Marty said. “Being their dad and their coach is very special to me and I think it’s pretty special for the kids.”