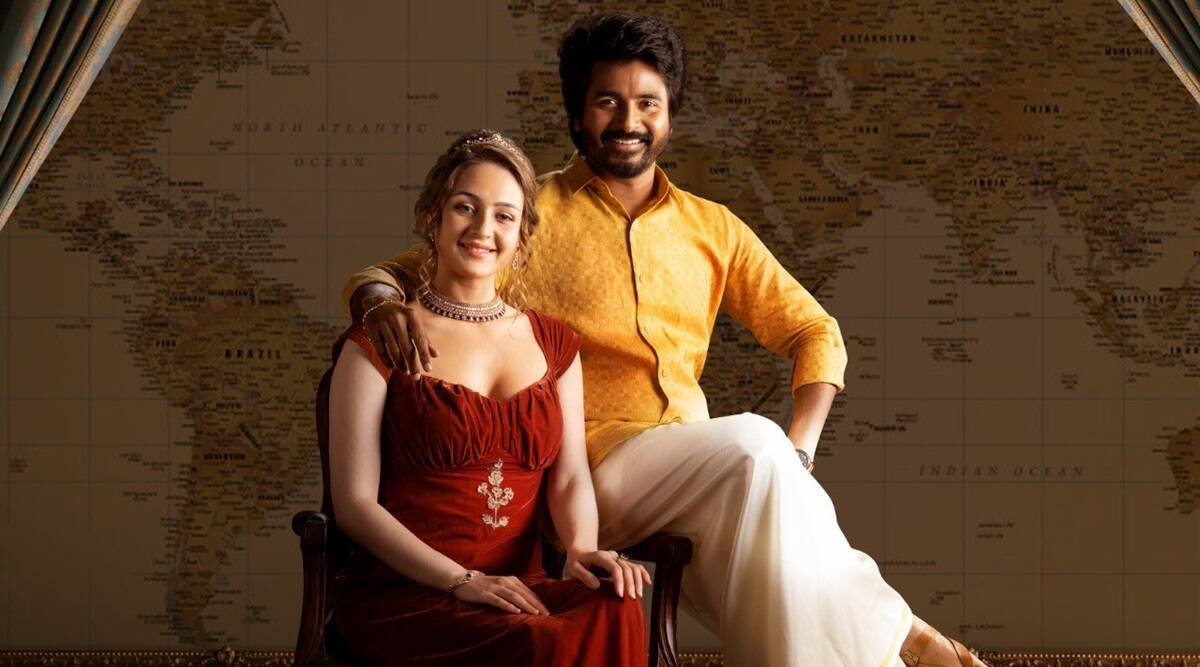 Prince movie review: Director Anudeep’s brand of comedy is unique and might not be for everyone.

I should perhaps put a disclaimer that I haven’t seen Jathi Ratnalu, and so I found the comedy of director Anudeep pretty unique and largely silly in Tamil. Mind you, you don’t end up laughing at the film. The absurdity of it all is very much intended. Many stretches are laugh riots – especially the one around the bottle gourd. The heroine Jessica (Maria Ryaboshapka) asks the hero Anbu (Sivakarthikeyan) to take her to a good vegetable shop. They end up in a neighborhood store run by a couple. The wife proudly claims that she married the guy because he is well-versed in English. Yet, when Jessica asks for a bottle gourd, he doesn’t know what that vegetable is supposed to be. Neither does our hero. Now, the whole sequence is about two guys trying to save their faces in front of their loved ones. The exchanges are mindless, ludicrous, and silly… but they are outrageously funny. However, we don’t get those bits a lot in Prince, which is otherwise a mediocre fare.

The brain of Anudeep should be an exciting place. It is hard to articulate his sense of comedy, and harder to come up with things like how Anbu’s voiceover introduces his father Ulaganathan (Sathyaraj): “Ivar thaan enga appa. Enna vida moothavaru (This is my dad. He is older than me).” I was caught off guard. I had to turn right and left to make sure that what I heard was right. A few more minutes into the film, I understood the brand of comedy. There’s nothing funny about the lines, the humour stems from how incongruous and absurd they are with the situation. How do you explain this emotional dialogue from Anbu towards the end of the film that tries to soothe his estranged dad: “Pechu pottila jeichapa kuda, Appanu naan un pera thaanae sonane (When I won in speech competition, I proudly called you as my father).” What’s funny in stating the obvious, you might ask. Still, it’s hard to figure out why you are laughing at it. The moment you try to explain Anudeep’s sense of humour, you will end up missing the point. It’s neither sophisticated nor pedestrian… I would like to call it ‘ingeniously silly’.

All said and done, Prince as a film fails to keep you engrossed. It is so obvious that the hilarious stretches are connected by a generic thread about a love story between a Tamil guy and a Brit girl. Anbu’s father Ulaganathan is an anti-casteist villain. Son of a slain freedom fighter, he takes pride in denouncing caste, creed and religion, but when his daughter marries someone in the family, he is shamed. So, he warns Anbu that he should never marry anyone from the same caste. Anbu, a social science teacher, exceeds his father’s expectations by falling in love with his colleague Jessica, an English teacher. Not just caste, he transcends race, ethnicity, country, etc with his love. So, the conflict arises when Ulaganathan realises that Jessica is British. He doesn’t want someone from the country that enslaved Indians for two hundred years and who also killed his father.

However, ‘conflict’ is a strong word for a film that doesn’t take itself seriously even for a nanosecond. There’s only a semblance of a story that doesn’t move forward at all. You keep waiting for the next good stretch. If you were to watch the film on OTT, you would have skipped the customary bridges that connect the good stretches, and you would still not miss anything. Another redeeming factor of Prince is Sivakarthikeyan. Just his affable presence sets a good mood, and one should give it to him for experimenting with this unique humour. Perhaps, this is the most experimental movie in his career yet. When the film ended with the end card ‘Subam’, an obsolete practice in Tamil cinema, I realised that I won’t remember Prince for a long time. But that doesn’t seem to be the intention. The point is to make you laugh for those few stretches, and maybe it’s a win… after all.