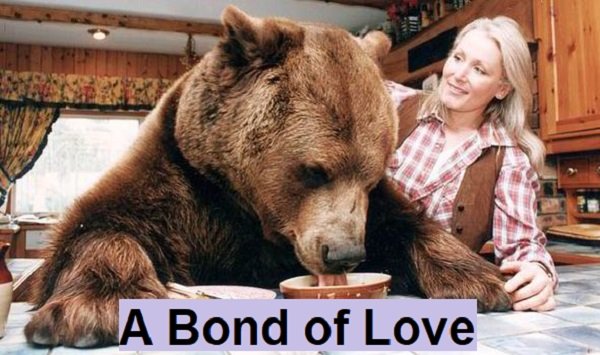 The Bond of Love NCERT Text Book Questions and Answers

I.
Given in the box are some headings. Find the relevant paragraphs in the text to match the headings.

An Orphaned Cub; Bruno’s Food-chart; An Accidental Case of Poisoning; Playful Baba; Pain of Separation; Joy of Reunion; A Request to the Zoo; An Island in the Courtyard
Answer:
An Orphaned Cub – para 3
Bruno’s food-chart – para 6
An accidental Case of Poisoning – para 8
Playful baba – para 12
Pain of separation – para 14
Joy of reunion – para 16
A request to the zoo – para 18
An island in the courtyard – para 21

Question 1.
“I got him for her by accident. ”
(i) Who says this?
Answer:
narrator said this.

(iii) What is the incident referred to here?
Answer:
About two years ago the narrator and his companions were passing through the sugar cane fields near Mysore. Suddenly, they saw a black sloth bear. One of the narrator’s companions shot it on the spot. As they saw the fallen animal, they were surprised to see that the black fur on its back moved. Then they saw that it was a baby bear that had been riding on its mother’s back. The narrator ran up to it and attempted to capture it. He finally succeeded in grabbing it and gifted it to his wife. This incident is referred to in the above statement

Question 2.
“He stood on his head in delight. ”

(ii) Why was he delighted?
Answer:
Bruno was delighted to see the narrator’s wife after three months of separation.

Question 3.
“We all missed him greatly: but in a sense we were relieved. ”
(i) Who does Sve all’ stand for?
Answer:
‘We all’ stands for the narrator, his wife and his son.

(ii) Who did they miss?
Answer:
They missed Bruno (Baba).

(iii) Why did they nevertheless feel relieved?
Answer:
They felt relieved because Baba was getting too big to be kept at home. That is why they had sent him off to a zoo.

III. Answer the following questions in 30 to 40 words each.

Question 1.
On two occasions Bruno ate/drank somethingThat should not be eaten/ drunk. What happened to him on these occasions?
Answer:
On the first occasion, Bruno ate barium carbonate which was kept in the kitchen to kill rats. He was paralysed and had to be taken to a vet. On the second occasion, he drank engine oil. However, the engine oil did not have any ill effect on him.

Question 2.
Was Bruno a loving and playful pet? Why, then, did he have to be sent away?
Answer:
Yes, Bruno was a loving and playful pet. He entertained everyone by his tricks. But he had grown in size and was getting too big to be kept at home. He could be dangerous for children. He was always kept in chains. So it was decided that he should be sent to the zoo.

Question 3.
How was the problem of what to do with Bruno finally solved?
Answer:
Bruno had grown in size. It was too difficult to keep him in the house. So it was decided that Bruno would be sent away to the zoo at Mysore. A letter was written to the curator who agreed to the proposal. Thus, Bruno was finally sent to Mysore.

The Bond of Love Thinking About Language

Question 1.
1. Find these words in the lesson. They all have ie or ei in them.

Question 2.
Now here are some more words. Complete them with ei or Consult a dictionary if necessary.

(There is a popular rule of spelling: ‘i’ before ‘e’ except after ‘c\ Check if this rule is true by looking at the words above.)
Answer:
believe, receive, weird, leisure, seize, weight, reign, feign, grief, pierce

II. Here are some words with silent letters. Learn their spelling. Your teacher will dictate these words to you. Write them down and underline the silent letters.

(ii) In the paragraphs above from the story the verbs are in the present tense (e.g. hold, goes, etc.). This gives the reader an impression of immediacy. The present tense is often used when we give a commentary on a game (cricket, football, etc.), or tell a story as if it is happening now. It is, therefore, called the narrative present. You will read more about the present tense in Unit 10.
Answer:
We thought that everything was over when suddenly a black sloth bear came out panting in the hot sun. Now I will not shoot a sloth-bear want only but, unfortunately for the poor beast, one of my companions did not feel that way about it, and promptly shot the bear on the spot.

Question 2.
Adverbs
Find the adverbs in the passage below. ( You’ve read about adverbs in Unit 1.) We thought that everything was over when suddenly a black sloth bear came out panting in the hot sun. Now I will not shoot a sloth-bear wantonly but, unfortunately for the poor beast, one of my companions did not feel that way about it, and promptly shot the bear on the spot.
(i) Complete the following sentences, using a suitable adverb ending in -ly.
(a) Rana does her homework …………….
(b) It rains …………… in Mumbai in June.
(c) He does his work
(d) The dog serves his master
Answer:
(a) timely
(b) heavily
(c) properly
(d) faithfully

(ii) Choose the most suitable adverbs or adverbial phrases and complete the following sentences.
(a) We should ……………. get down from a moving train, (never, sometimes,often)
I was ………………… in need of support after my poor performance, (badly,
occasionally, sometimes)
(c) Rita met with an accident. The doctor examined her ……………… seriously, immediately)
Answer:
(a) never
(b) badly
(c) immediately