Poem 3 A Tiger in the Zoo 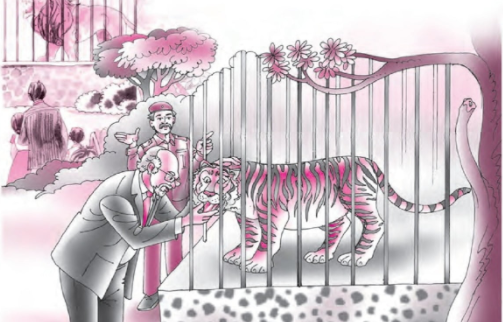 Read the poem again,
and work in pairs or groups to do the following tasks.

(i) Find the words that
describe the movements and actions of the tiger in the case and in
the wild. Arrange them in two columns.

(ii) Find the words
that describe the two places, and arrange them in two columns.

Now try to share ideas
about how the poet uses words and images to contrast the two
situations.

Notice the use of a
word repeated in lines such as these:

(i) On pads of velvet
quiet,

In his quiet rage.

(ii) And stares with
his brilliant eyes

At the brilliant stars.

What do you think is
the effect of this repetition?

This
repetition is a poetic device used by the poet in order to enhance
the beauty of the poem. ‘Velvet quiet’ refers to the
quiet velvet pads of the tiger, which cannot run or leap. They can
only walk around the limited space in the cage. The use of ‘quiet
rage’ symbolises the anger and ferocity that is building up
inside the tiger as it wants to run out into the forest and attack a
deer, but the rage is quiet because it cannot come out in the open as
it is in the cage. This double use of ‘quiet’ has brought
immense beauty to the poem. Similarly, the use of ‘brilliant’
for the tiger’s eyes as well as the stars also brings out the
magnificence of these lines. The tiger has dreams of being free in
its ‘brilliant’ eyes. It sees
the stars (that have also been described as brilliant) with the same
eyes. It stares at the brilliant stars with its brilliant eyes
thinking about how beautiful its life could be in the forest. The
repetitiveness of these words gives a wonderful effect to the poem.

Read the following two
poems − one about a tiger and the other about a panther. Then
discuss:

Are zoos necessary for
the protection or conservation of some species of animals? Are they
useful for educating the public? Are there alternatives to zoos?

The
tiger behind the bars of his cage growls,

The
tiger behind the bars of his cage snarls,

The
tiger behind the bars of his cage roars.

It
would be nice not to be behind bars all

Because
they spoil my view

I
wish I were wild, not on show.

But
if I were wild, hunters might shoot me,

But
if I were wild, food might poison me,

But
if I were wild, water might drown me.

Then
he stops thinking

The
tiger behind the bars of his cage growls,

The
tiger behind the bars of his cage snarls,

The
tiger behind the bars of his cage roars. PETER NIBLETT

His
vision, from the constantly passing bars,

has
grown so weary that it cannot hold

anything
else. It seems to him there are

a
thousand bars; and behind the bars, no world.

As
he paces in cramped circles, over and over,

the
movement of his powerful soft strides

in
which a mighty will stands paralysed.

Only
at times, the curtain of the pupils

lifts,
quietly. An image enters in,

rushes
down through the tensed, arrested muscles,

plunges
into the heart and is gone. RAINER MARIA RILKE

Some
species of animals might be safer in a zoo than in a forest. In a
forest, they could be hunted down, poisoned by some wild food, or
could drown in water. However, a zoo is not the correct substitute
for a forest. In a zoo, an animal would feel caged, bound, and not
free to roam about in the wild. It is for this reason that wildlife
sanctuaries and national parks have been instituted in order to
conserve several endangered species. These places provide protection
as well as natural surroundings to these species. They can roam about
freely in their habitats and are safe too. The public can visit these
parks and get educated about the animals and their lifestyles. The
parks and sanctuaries are run using a strict set of rules, the most
prominent being the ban on hunting. Since the animals are in the
open, visitors would not be able feed them and would not misbehave or
try to play with them as they are under strict guidance. Such
incidents have been recorded in zoos where people irritate and tease
the animals. Hence, a wild life sanctuary is a good alternative for
animals to be safe as well as in their natural surroundings.