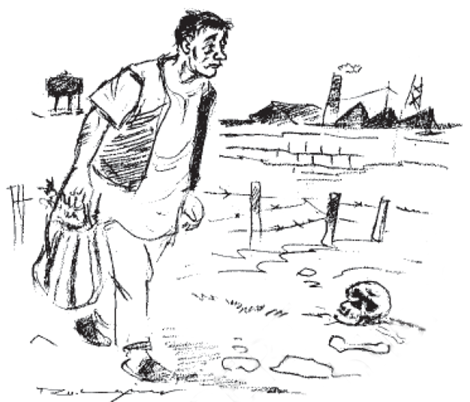 Question 2.
How does Iswaran describe the uprooted tree on the highway? What effect does he want to create in his listeners?
Answer:
Iswaran describes the uprooted tree as an enormous bushy beast lying sprawled across the road. He is influenced by Tamil stories full of suspense. He loves creating suspense before telling anything. His. stories are so lovely that they leave a long lasting impact on the listeners’ mind.

Question 3.
How does he narrate the story of the tusker? Does it appear to be plausible?
Answer:
Iswaran is a good storyteller. He makes his stories vivid by telling them in a unique style. He narrates an incident involving a tusker. One day an elephant goes mad and becomes uncontrollable. He enters the school ground where students were playing. Iswaran was also one of them. Seeing the wild elephant, all the children ran into their classrooms.

Question 4.
Why does the author say that Iswaran seemed to more than make up for the absence of a TV in Mahendra’s living quarters?
Answer:
Mahendra does not have a TV in his quarters but Iswaran is more than a TV. He is a good storyteller. He entertains Mahendra by telling him thrilling and mysterious stories. He creates suspense in everything. His stories are full of suspense, horror and adventure. Mahendra always enjoys his stories and never feels the absence of a TV in his quarters

Question 6.
Can you think of some other ending for the story?
Answer:
Mahendra was upset. He was an educated, rational man. He did not want to believe in a ghost but he could not forget what he had seen the previous night. He could not work in his office. He felt sick. He decided to take a short leave and go for a rest. He came back home early.

He did not find Iswaran at the door. He entered the house and heard a cry. It was the same sound. He became suspicious. He came to the kitchen and saw stealthily that Iswaran was wearing a mask and making the sound. Now Mahendra had understood everything. He was not happy with him. He said nothing but decided to leave both, the place and Iswaran.