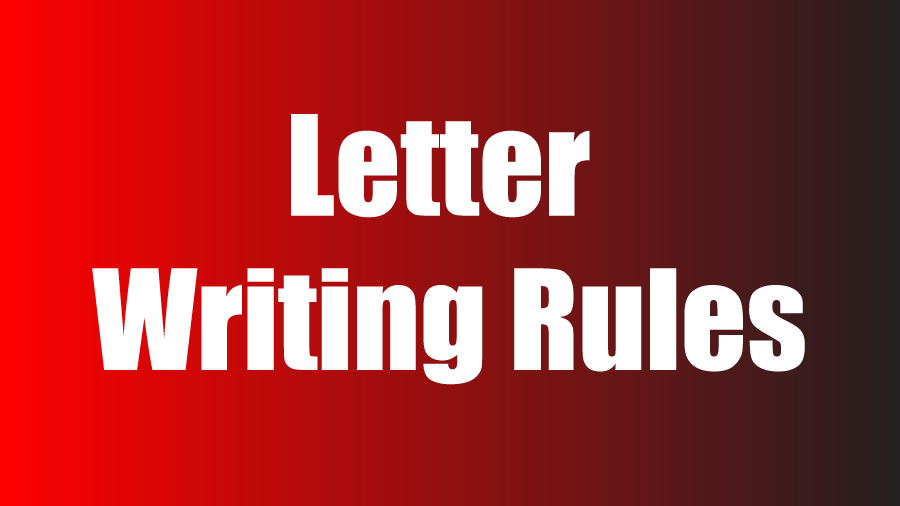 These types of letter are written to relatives or friends. These can also include invitations etc. Such kinds of letter are also known as Personal or Social Letters.

These letters are used as a communicative tool in the business and are usually written by the traders, firms and companies etc for business purposes. These kind of letter fall under the category of formal letters.

These include letter of application, letter to government officials and letter to Newspapers etc. These letters are used for the official communication of the information from one department to another. Ex:- Termination letter, Recommendation letter, Reference letter, job letter etc

Irrespective of the type of letter there is certain matter of forms which are applicable all and have to be taken care of while writing any kind of letter to make it impressive and purposeful.

Main six Points that has to be taken care of while writing a letter are:-

1.  Heading of a letter basically consists of Two Parts:

Heading can be written on the Right or Left (keep on changing with time-presently we follow the convention of writing Heading in the left corner) corner of the first page of the letter.

Examples of a Heading are:-

2.  The Salutation in the letter will depend upon the depth of relationship of the writer with the person to whom the letter is being written thus vary from letter to letter.

Salutation is written at the left hand of the page, at a lower level the Heading. The first and last word of the salutation are always started in Capital Alphabets.

Besides letter can be make impressive to leave an indelible mark on the reader we can use following given starting and ending to the various kind of letters:-

Note:- Never use apostrophe(‘) with yours in the subscription.

5.  The Signature of the writer of the letter should be below the subscription. In a letter to the stranger, the signature should be clearly written so that he could know whom to address in reply.

Note:-A women should prefix to the name Miss or Mrs. or Ms in brackets before her name like

6.  The Address is written on the envelop of the post card very clearly with pin code.